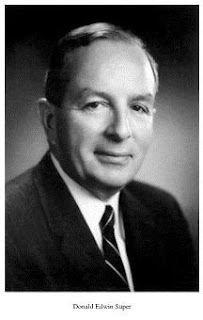 Dr. Donald E. Super was born on July 10, 1910, in Honolulu, Hawaii. His parents were Paul and Margaret Louise (Stump) from Missouri. Super received his Doctorate of Science degree from Oxford University.

At the beginning of this career, Super began working at the YMCA as an employment counselor from 1930’s-1940’s (Savickas, 1994). Super was the founding director of the Cleveland (Ohio) Guidance Services was also later the director of Clark University’s Student Personnel Bureau.

Throughout his career, Super was involved with gathering data which was later utilized with the co-existed information that was used for vocational guidance (Savickas, 1994).  Super compiled this data while he was working at the YMCA based on the various occupations within Cleveland Ohio, the “Compilation Project” (Savickas, 1994).  Later Super released his first book on vocational counseling, Dynamics of Vocational Adjustment which was published in 1942.  In his book, he suggested that occupational decision is a strategic process instead of a spontaneous occurrence that takes place with someone’s life.

Super was well known for his work within the vocational guidance era and later transitioned into counseling psychology which consists of both career counseling and life planning (Savickas, 1994). Donald Super was also recognized for his theories that he developed within career counseling (e.g. Career Development Theory and Life-Career Rainbow).