By:  Kimberly Swanson, M.S.-Psy, CNA
Psychosocial theory was created and developed by Erik Erikson, psychologist.  Erikson’s psychosocial theory is an expansion of Freud’s psychoanalytic theory.  According to Erikson’s (1959) theory of psychosocial development there are eight phases.  Similar to Freud, Erikson states that crisis takes place during each phase of development. In Erikson (1963), when crises takes places during psychosocial stages of development they take place due to the mental needs of the individual (i.e. psycho) working against the needs of the general public (i.e. social).
According to Erikson’s theorization, successfully completing of each phase can enable outcomes of having a healthy personality and acquiring good solid morals. Essential virtues include traits that enables the ego to overcome tragic situations or circumstances.
Not completing a certain stage in development can lessen the chance of completing more advanced phases and can cause more unhealthy personality and having a sense of identity.  Fortunately, these phases can be changed and improved over time.


The following charts are Erikson’s 8 Stages of Psychosocial Development: 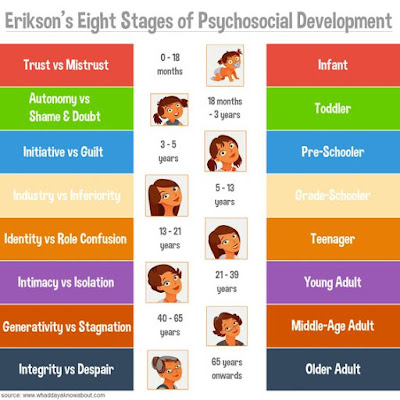 Posted by Kimberly Purpoz at 11:25 AM